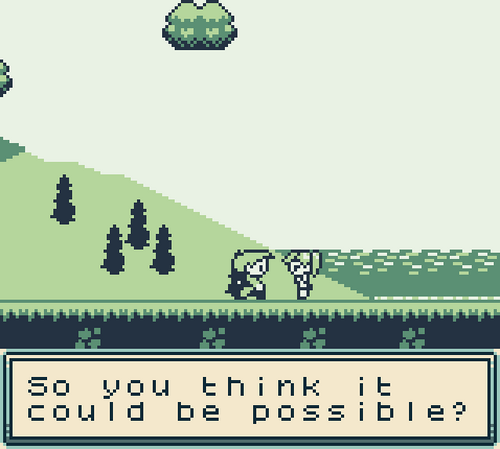 After a couple of weeks studying how GBStudio works for the marathon jam and the GameBoy competition i decided to work over the template included on the engine to exploit their feaures and get familiarized with the engine.

I found this engine very friendly and the learning curve was smooth, but there are tons of features you need to know in order to get the most of the engine. I decided to work on an entirely new game but ideas didn't appear, then i found another Jam, the bored pixel jam and i found the theme very inspirational "You are not the hero"

I like to work on management games mixed with date systems, so i think this is a good chance to work in something new and with the recent study of GBS, the hard restrictions of GB limited my range of action, but also define very specific goals. I had to work in a  deep story, recongnizable characters and it was a chance to set down some interesting ideas i had from some time allowing space for content for my harem style games, where you must select only one of all the available ones this time not for you, because, you are not the hero after all.

The inclusion of the third jam restrictions made this challenge even more attractive and i though it was a good chance to put on march everything i was practicing on the last 2 weeks in JUST ONE, so i started work on this on July the 17th.

I like to write down all ideas i have and write down as much details of the engines (or scripts) needed for the games, this was not the exception, so i use one day to set things on paper: schemes, algorythms, requeriments, story and sketches and music... i had to make my own music.

Music was done using OpenMTP, i used some basic sequences as you may notice in game just to make things run faster, but they are easy listening and that's what i wanted.

Then i started working on the backgrounds, using a single sprite character for all my events just to know where they will be and how they will look with the enviroment.

I found the beta version of GBStudio for GBC that allow me to recolor my entire game...

It was wonderful to see they jump from the greenish GB screen to the (almost) full color.

As before, doing this represents a new challenge, because it's impossible to work the traditional pixel way, draw this and recolor it, now my sprites are limited to 3 colors, and the bakgrounds, even when they can have 4 need a special pallete almost every one to get the full color ilusion.

GBS only allows you to use 6 diferent palletes, and they should share one color between them to reach harmony, this way you only have 19 colors max. You need to think and try how to mix them in order to obtain a smooth appareance in game. This is the start screen 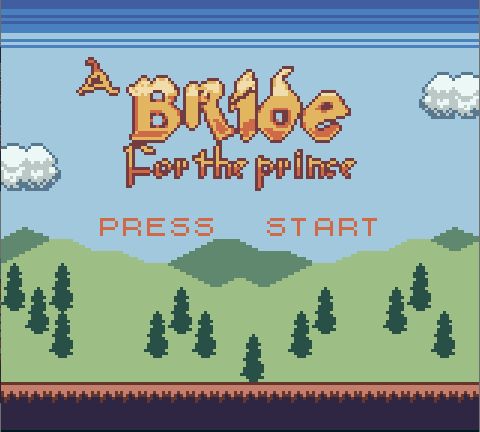 One of the features GBS have is the chance of change colour paletes and i tried this on the main UI and the backgrounds to have interesting changes and selecting new palletes for each scene. At this time i had not found a limit for the paletes used, i just have around 30 and i'm recycling a lot of them.

The good point here is i decided to migrate to color in the early stage of the development so it was not so much work to be redone.

My next step was to set a good intro, and the chance to jump that intro if you have saved the game at least once, this was done the second day, so i take advantage of the weekend as much as possible to advance on all the more complex features like palete changes, main systems, gold management (GB only allows you values from 0 to 255 for variables) money cannot be restricted to that so i worked on an engine to allow the player to have 26k of pure gold.

My next step was to make the sprites as i needed them, pausing the programming and drawing.

All backgrounds and sprites were made using Graphics Gale. For the graphics section i found this:

I found the disadvantages as chances to be more creative and think on solutions.

I decided to work in recruiting the first heroine before uploading the game and keep working on it until is finished so, at this date July 20th, the game "ends" when you recruit Danae i still have almost 3 days before the first jam judging period starts and i hope to upload more features in that time, until then i hope you enjoy this game as much as i am enjoying making it.

Get A bride for the prince

A bride for the prince