Your best friend, the prince, has been exiled because of his lack of responsability, and he drowns you with him.

Now his father have set a challenge for him, whose goal is to find a bride in less than a year.

Being irresponsible, lazy and crybaby, odds are he cannot reach that goal, and will be exiled forever, your mission if you decide to take it: Help him find a bride "and you can keep any other girl" - as his own words.

Save can be done when you sleep.
Intro can be skipped if you start a new game after saving once.

THIS IS A WORK IN PROGRESS

Actual playable version is not finished, there are undeveloped maps and features, actual game "ends" when you recruit the farmer. Let's call it an early access version.

Mountain path is open
Collect resources on the mountain.
Rescue Amy after sending Danae on some missions.

Working on this using the "you are not the hero" theme restriction from bored pixel jam and all restrictions from GB console.

Working hard to reach a decent project to share.

I hope you enjoy it.

Any comment suggestion or critic is, as always greatly recieved.

In case you weren't planning to already- don't forgot to make a downloadable ROM file available so the judges can test on actual hardware.

Thank you! i will

Glad you liked it.

I need to say Nice Game!

- The aesthetics and music are on point! Very good job! Definitely remind me of GBA era.

- I think the story and dialogue are humorous and work well for what you're doing here!

Criticisms (I know your game is unfinished, but I figure all criticisms can help!):

- Music seems to have stopped once I got to take control of characters. It started again once I entered a new room

-Intro is very long as another commenter noted.

- I struggled a bit to go in and out of doors maybe make it easier to do this same with going up and down stairs perhaps snap the player into position if they're close enough to the trigger?

- there are also quite a few spelling and grammar mistakes throughout the game. I take it that English is not your first language and thats okay! But, you should get someone to review all the text in your game to make it easier for players to understand (also supporting translations for a game like this is a good idea)!

-After recruiting the first citizen, Danae, I had no idea what to do next. This is ultimately when I stopped playing I went through 3 days of practicing with her with no more progress. Perhaps the hero can give me more "hints" on what to do next.

What is variable secuencia? It isn't really explained or I missed it? I'm assuming its population size?

Overall I enjoyed your game! I hope this helps and isn't too harsh!

I really apreciate the time you took to review so deeply the game.
I took notes about each point you mention and will consider all the feedback you gave me.

I'm actually working on a battle system and it will, of course be implemented with Danae! I will check if there is a way to polish the door mechanics due to limitations of the GBC engine.

Thank you, your comments are a great help and nothing harsh at all.

Love the GBC visuals, but I've got issues with controls.

It says "Press Start" but doesn't explain what "start" is. It doesn't have to be in game, itch page would suffice. After a lot of trying, I've found that it's "left alt" - a very unfortunate choice of key, since alt+arrow switches a page in the browser!

The intro is amusing, but it's really long, so could use some skip option, especially, since the game can be turned off accidentally, and I didn't find the save function yet!

Sorry, you're right, the controls are Z and X by default. I will insert that in the starting page right before the game.
Also i will insert it here in the page.

You can skip the intro after the first time of saving.

Game is saved when you go to sleep, it gives you the option.

Thank you for playing and for your comments!

I love this game the art is great! and the characters and story i cant wait to see where this goes! (also this feels on par to pokemon blue to me)

I'm glad you are enjoying this game.
About the pokemonish feel, i agree, i think it's because the way the world is recolored using pallete sustitution for the 3 main colors and not a real colorization. But i think is something that gives it personality. I'm also a fan of the first generation of pokemon games (blue and red in early GBC).
Thank you for playing and for your comment!

You came up with a very engaging story

I hope to keep the same level later on. Thank you for playing and comment.

excited to see where it goes 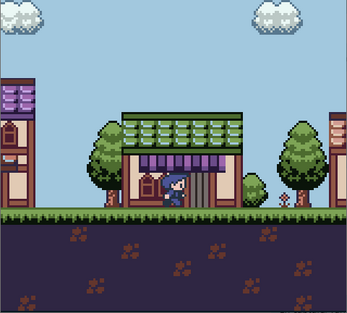 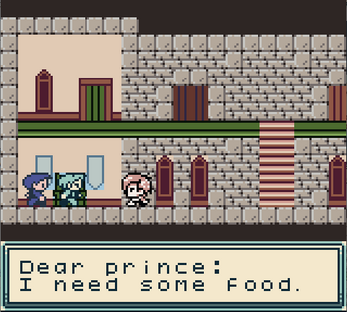 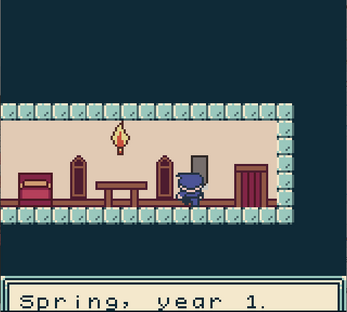 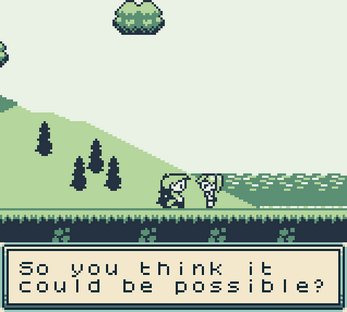